Posted by Adrian Ayres Fisher on May 08, 2021
biodiversity Chicago Wilderness forest preserves Illinois landscape
+
Gray wolf, apex predator/National Park Service As a non-hunting, vegetarian nature-lover I am in favor of deer. My heart lifts when I see a doe and fawn browsing in the green dappled light of early summer in Thatcher Woods. I marvel at their ability to move quickly through the trees and to seemingly appear and disappear at will. Yet I believe that deer herds should be managed so that their population will fit the available habitat.  In the natural, food-webby scheme of things, deer, as herbivores, are prey animals with high reproductive rates and a need for large areas full of the plants that nourish them. Over the past million years they’ve co-evolved with their predators; until the 19th century, deer roamed widely, their populations kept in balance by the wolves and Native peoples who depended on them for sustenance. Wolves took what they needed and left the rest for scavengers such as coyotes and crows. Humans used nearly every part of the deer–meat, hide, hooves, bones, and antlers
2

Native Gardens through the Seasons: A Virtual Walk

Early Spring Notes: Life in the Garden During a Risky Time

My Great-Great-Grandfather, a City Park and Some Monarch Butterflies

And, as it works, th' industrious bee
Computes its time as well as we.
How could such sweet and wholesome hours
Be reckoned but with herbs and flowers!

...We can stop most [species reductions] by redesigning anthropogenic habitats so that their use is compatible with use by a broad array of other species. That is reconciliation ecology. Many pilot projects...are demonstrating that it can be done.

A thing is right when it tends to preserve the integrity, stability, and beauty of the biotic community. It is wrong when it tends otherwise.

Interview about Gardening for Native Bees

Keep Up with Ecological Gardening

Get Ecological Gardening by Email 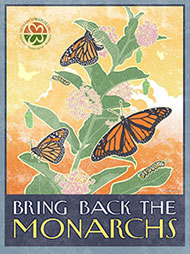 Beautiful Paintings of the Des Plaines River and the Midwest