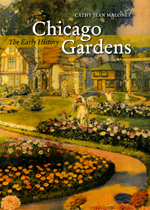 The Story of the Transformation of a Landscape

OK, the snowdrops were up a month early; the butterfly bush did not die back to the ground (something that helps it avoid the "invasive" label and thus avoid banishment); the chickadees are akkk-akkk-akk-ing all around. On Saturday, one sat three feet above me on a branch telling me what for as I pulled out the poor, tired, remnant chard. Who would believe such a tiny bird could make such a brassy sound?
Nevertheless, as I keep reminding myself, as my gardening friends and I keep reminding each other in schoolmarm voices: It’s Not Spring Yet.  Even though we have moved past the cross-quarter days of early February into ascendant light and temperature time, day lengths have not skipped ahead to March or April, so there's still opportunity for long evenings of reading.
Lately I've been immersed in Cathy Jean Maloney's impressively comprehensive Chicago Gardens: The Early History  (University of Chicago, 2008). Maloney writes that the book, which covers the period between the 1830’s and 1934, is the culmination of twenty years of research. This is easy to believe--the detail is exhaustive and Maloney supplements the historic record with extensive field research. At the end of each chapter is a useful selection of modern gardens and parks that have preserved something of their 19th and early 20th century look and feel. In addition, the book is liberally illustrated, often with examples of period photography, maps, and drawings from her own collection. At the end is an extensive reference of people and places mentioned in the text and a list of plants used at various periods.
Maloney recounts the efforts of early great horticulturalists to learn to grow fruits, vegetables and ornamentals on the prairie; discusses the early florist trade, flower and garden shows; how different immigrant groups gardened; early community gardens; the great landscaping architects; changing gardening styles; the efforts to get people to eat fresh fruits and vegetables (at one time they were thought to spread cholera); and how our system of parks and forest preserves came to be. Some of this I knew from other sources, but the level of detail and the effort to show how interconnected are Chicago’s gardening, political, and social histories make this book especially valuable.
You can’t help admiring these early gardeners--who often were also naturalists--for their pluck, persistence and ingenuity--yet there is a near-tragic subtext, as well. The book conveys, like time-lapse photography, how the city grows, landscapes change, subdivisions get built, and Chicagoans go all out to remake the marsh/swamp/prairie/savanna landscape to suit themselves, often with the best of intentions, and with outcomes conducive to Chicago’s ambitions to great-city status but destructive to native plants and wildlife. Fortunately, enough people--led by naturalists, landscapers and gardeners--realized almost soon enough our responsibility to the natural landscape. Along with development, we have always had conservation, so that today we live in the Chicago Wilderness Region. In Cook County alone, 68,000 acres--11% of the land--belong to the forest preserve system championed by rich and poor alike at the turn of the 20th century. It was a near thing, a close shave, that could so easily have gone entirely the other way: Even now this green legacy--encompassing city parks, gardens and natural areas--requires constant defense against those institutionalized forces that lead people to constantly want to “improve” a piece of ground, to “make it useful,” starting with draining the ground, removing native plants, cutting down some trees and putting up a building--or two or three or a thousand.
Of course there are the great books by professional historians, like William Cronon’s Nature’s Metropolis: Chicago and the Great West, which are groundbreaking and enlightening in their own right. But some of my favorite books about this northeastern Illinois ecotone in which I live are books by people who may get their living by other means, who are passionate, knowledgeable, and dogged in their determination to tell a particular, local story. Books such as Chicago Gardens,  A Natural History of the Chicago Region, by Joel Greenberg, and The Chicago River: A Natural and Unnatural History, by Libby Hill, take years to research and write, true labors of love. Cumulatively, they tell the environmental story of this particular region--yet every place must have its similar cadre of devoted, tenacious historians who love the ecosystem in which they live, and who help us see our home-places in new ways.
Chicago trends such as rooftop gardens, community gardens and  cold-weather vegetable gardening I thought were new, I now understand are over a hundred years old, though in recession during the mid-20th century. When visiting relatives in the Lakeview neighborhood, I now imagine late 19th-century greenhouses full of flowers and winter vegetables and fields devoted to the cultivation of the celery that once flourished in that area’s sandy soil. This spring and summer I’ll go on field trips to a few new places Maloney recommends, and see for myself the living history embodied in some of our old and restored landscapes and gardens. And as I grow my own vegetables and volunteer in the savanna and prairie along the Des Plaines River, I’ll remember I am carrying on in the great, complicated tradition of gardening in Chicago.
Related Post:
An Excellent, Timeless Book
books Illinois landscape