Posted by Adrian Ayres Fisher on September 16, 2011
Here is a piece I wrote for a Triton College email newsletter for faculty and staff:

Triton College is known for its neat, manicured landscape featuring acres of carefully tended lawns, trim bushes, and bright annuals and perennials. However, something a little wilder is going on in an area in back of the science building, where Triton’s Greening the Campus Committee and biology students have established a small prairie garden. 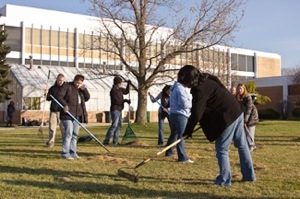 In December 2009, students and committee members prepped the area and sowed into sod the seeds of nearly 100 native prairie species. We had learned that native plant areas started this way take longer to establish, but there are fewer problems with weeds. We also collected seeds in local forest preserves, which we cold stratified and propagated in the science greenhouse for planting out the next spring. 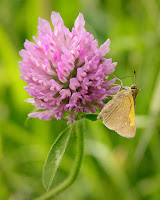 The first spring and summer not much happened, though as the soil warmed we saw a few seedlings, and the plants we had set out grew well. Would the experiment work? We weren’t sure. As advertised, there were very few weeds, but mainly it looked like someone’s badly neglected lawn. Since we had determined on a five-year timeline, we reassured a few questioners and more-or-less patiently waited to see what the next year would bring.

This spring Triton’s grounds crew de-thatched the area and removed an ailing ash tree. We set out more plants we had propagated, and waited. Would this second year show improvement? Would there be more flowers? Tall grasses? When spring semester ended, prospects seemed dim, though a diligent searcher could find many more tiny native plants among the turf grasses. The campus geese also seemed to like the area, and something—geese? deer? —was grazing when we weren’t watching. More waiting ensued.

After a hot, rainy summer, this fall we are pleased to announce that not only are flowers and native grasses in bloom, but beneficial insects rarely seen elsewhere on campus, such as monarch and sulphur butterflies, and several species of bees, moths, beetles and solitary wasps have appeared as well. The project seems as though it will succeed, and we hope to grace the area with an informative sign and possibly a bench. We have started collecting more seed to propagate, and plan to conduct our first burn when weather permits, either in late fall or early spring.

margaretart said…
What an interesting project. Amazing that people can restore the "original master plan." I hope it will continue to develop well and cast its own type of beauty against the too-trimmed grounds. Any place that welcomes butterflies and bees has to be a good place.
September 17, 2011 at 2:27 PM

Anonymous said…
Congratulations, Adrian! What a great project. I hope you'll share more photos and a progress report of how it's doing next season. -Jean
September 17, 2011 at 6:54 PM

Thanks for the encouraging comments. It does look a little raggedy this year. I'll definitely post pictures when we have our burn and then will continue on next year.
September 18, 2011 at 1:51 PM

Winter and summer, the native plant gardens at the UW Arboretum sequester carbon while adding beauty and habitat. Designed by Darrel Morrison. Gardeners new to the concept of carbon gardening often ask these two questions: What good soil management strategies will help maximize carbon sequestration? And, what would be a good plant palette to help accomplish this? Good questions both, to which I wish I could give detailed, specific answers. Carbon gardening in northern Illinois, where I live, differs from carbon gardening in other regions; each will require region-specific strategies and plant palettes. Everything depends on where the gardener lives and the conditions in which they are gardening. Thus, what follows is more in the way of a general discussion that might help point in the right direction than a series of rigid prescriptions. Organic carbon sequestration is one of the oldest tricks in nature’s ancient playbook for global ecosystem regulation. These days, as we se