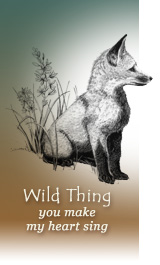 Sometimes I wonder if I'm actually a gardener. For example, while thousands of gardeners visited the Chicago Flower & Garden Show last Saturday (it continues through March 13), I went to the Wild Things Conference at the University of Ilinois at Chicago. (There's enough overlap, though, that I'm sure many people plan to attend both.) Wild Things is a biennial celebration of--well here I try to think up some short, snappy adjective/noun combo, and can't. To me it celebrates what's green and growing and wild, in both protected areas and the city, and offers ways to help nurture the nature that surrounds us while lightening our human impact on the land. It was organized by Audubon Chicago Region in cooperation with the Habitat Project, the Volunteer Stewardship Network, and Chicago Wilderness.

Approximately 1,300 nature lovers, conservationists, ecological gardeners and landscape managers gathered to attend presentations and take part in discussions on a range of topics. In general the participants looked hale and hearty, competent and outdoorsy, and seemed energized by the wealth of learning and networking opportunities.


My itinerary included prairie restoration; the ecology of oaks; native woody plants for urban settings; the effective use of rain gardens and bioswales to manage water; climate change adaptation; green infrastructure; and making use of that annoying yet free resource, buckthorn. Did you know that you can make anything from toys to garden trellises out of buckthorn, using non-electrified hand tools? Buckthorn also burns hotter than oak: the North Park Nature Center plans to use seasoned logs to boil its maple syrup this spring.

The keynote speaker was Curt Meine, who discussed Aldo Leopold's connections with Chicago. He has written a well-respected biography of Leopold, and I have greatly enjoyed his book Correction Lines: Essays on Land, Leopold and Conservation (Island Press, 2004).

I was not surprised to learn that Leopold and Jens Jensen knew and respected one another. Leopold was also friends with and influenced Roberts Mann, Director of Conservation for the Cook County Forest Preserves (he wrote "City Folks Need Roots in the Land," which I want to find and read). Thanks to them and others (so many, so great) like them, and the organizations which sprang up in the early 20th century, Chicago has a great heritage of conservation and continuing commitment to green open space that too many urban areas lack.

Later in the day I spoke briefly with Meine and learned of his work at the Chicago-based Center for Humans and Nature. The center funds its multidisciplinary team of scholars in their study of questions related to our place in the biotic community. As their mission statement puts it, "The Center’s mission is to explore and promote moral and civic responsibilities to human communities and to natural ecosystems and landscapes." The Center has co-produced the first-ever documentary film about Aldo Leopold, Green Fire, with which Meine has been intensely involved. (He had shown a clip during his talk.) It will be coming out this spring.

I love Jens Jensens book Siftings which I find myself rereading often.
Heather
March 9, 2011 at 1:56 PM

Diana Studer said…
Maybe later, you can share an abiding impression, of something you learnt that day? It must have been inspiring and encouraging!
March 9, 2011 at 3:10 PM

Adrian Ayres Fisher said…
Carol and Heather,
I think you both would have enjoyed it. Haven't read Siftings. I'll look it up.

EE, It was inspiring that so many people are doing and accomplishing so much. I came home with the feeling that I'd better get busy and do more.

One abiding thing I learned, or relearned, is that there's so much we don't know or understand about the natural world.

Even experienced land managers would sometimes say, in answer to a question about restoration, "I don't know why, but it seems to be this way, or because of that set of conditions."
March 9, 2011 at 10:32 PM

garden girl said…
The conference sounds alot more useful than the garden show Adrian, and more inspiring. The thing I enjoyed most about the garden show was getting together with friends, which was wonderful.

Thanks for this - I wasn't aware of this conference previously, and it sounds like something I'd really enjoy.
March 10, 2011 at 10:22 AM

You would have enjoyed it. They had more workshops about native plant gardening and backyard nature this year.
March 10, 2011 at 8:19 PM