James Joyce was not a gardener. His subject matter was lower-middle-class Dublin at the turn of the twentieth century and his explorations of that city's life form some of the greatest literature written in English: modern, difficult, anti-romantic, and dense with quotation and allusion. If you should say "I had an epiphany," you will echo Joyce. He took the word out of its religious context and made it into a moment of extreme insight--as though visited from above--that first his characters experienced in Dubliners, and now, over a hundred years later, all of us still experience from time to time.

If you have  an epiphany out in the garden on a fine June 16, you have entered Joyce's world, even if you've never read Dubliners or Ulysses. On this day people worldwide celebrate Blooms Day, comemorating June 16, 1904, the day on which the events of Ulysses take place, the day during which  Leopold Bloom perambulates about Dublin (you can find more information at the James Joyce Centre). This morning I pulled out my old copy of Ulysses and was amused to find this note on the flyleaf: "Started Blooms Day, 1983 and completed August 15, 1983. Adrian Ayres." And notes throughout. So diligent I was then.

Of course mid-June's often delightful weather is a highlight of our year, at least in the northern hemisphere. In my garden, some things are in flower that have been blooming here perhaps since my house was built in 1904. They include orange daylilies (or "grandma lilies"); tall, very fragrant white lilies; and Creeping Bellflower--all fairly degage and, some think, weedy. They're also pretty, and comemorate the first and subsequent owners who always gardened well and kept the soil in good shape.

Ate the first ripe raspberry yesterday. It's time to get some jars and lids for making jam.

Anonymous said…
Dear Adrian, I very much enjoyed all the literary references in this posting.

Adrian Ayres Fisher said…
Thanks, Edith, it was sparked by your last post that began with Irish writers.
June 16, 2010 at 10:15 AM

Greenearth said…
Loved Ulysses and interested to hear of Blooms Day. I live in the Southern Hemisphere but June is my perfect gardening time as is a struggle with the heat in summer. For me Blooms Day is also the perfect time in the garden.
June 16, 2010 at 3:56 PM

Noelle said…
We were blessed to have traveled to Dublin and heard many wonderful things about James Joyce. I grew Coreopsis and Purple Coneflower in my previous home, which makes me wonder why I don't have any in my current home? I need to rethink my garden :-)
June 16, 2010 at 9:08 PM

Adrian Ayres Fisher said…
Elephant's Eye, yes, words and how they help us reconnect to the world in new ways.

Greenearth, I'm glad to hear from someone else who has read it. I have much to learn about other parts of the world.

Noelle, I hope to go to Dublin someday. The nice thing about Coreopsis and Coneflower (besides being so easy), is their attraction for bees and butterflies. 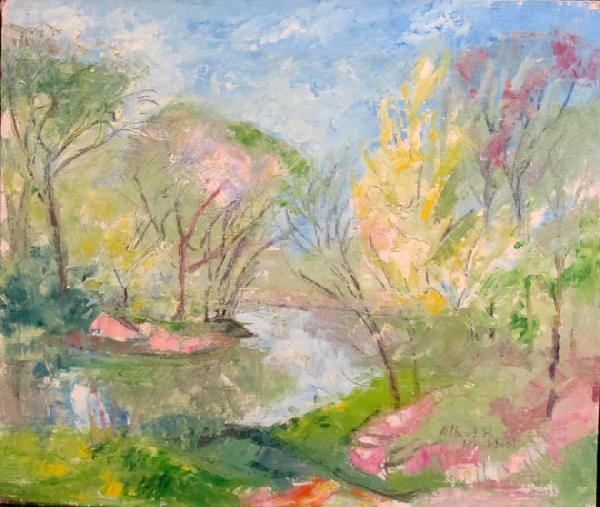 "We are the children of our landscape; it dictates behavior and even thought in the measure to which we are responsive to it." (Lawrence Durrell)

As I write, it’s the first day of spring. I’ve been busy with tasks ordained by the season: checking the gardens for winter damage, deciding what flats of sedges and flowers to order, starting seeds in the greenhouse and considering what vegetables to put in. The sap is finally rising; the tall maples have gone fuzzy at the tips of their branches, as they do when in bloom, and the bur oaks have developed the sort of knobbly look on their twigs that announces the swelling of buds. The trees are moving more limberly in response to the wind after prolonged winter stiffness. Still, everything remains, briefly, just barely, in abeyance before the sudden mad rush of April and May.

Right now, I’m supposed to be answering some basic questions posed by a person new to native plant gardening: How do you start learning about native plants? I… 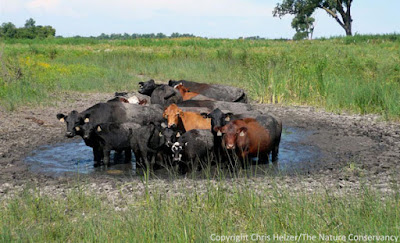 Though I have no personal aspirations of the farming or ranching kind, own neither property measured in acres nor livestock, and in fact eat no fish or meat (though I do eat dairy and eggs), I check in frequently with Soil4Climate, a Facebook group devoted to soil carbon sequestration and holistic grazing. I’ve learned a huge amount from the folks that post there, and enjoy the online conversation. It serves as a useful antidote to the news of destruction that emanates from so many places and sources on our beleaguered planet.

Even here, however, peace does not prevail. To me—urban gardener, land restorationist and soil carbon sequestration advocate—the theory and practice of holistic grazing makes so much sense for certain ecosystems that I’ve been startled to discover an ongoing, multi-faceted, sides-must-be-taken debate about holistic grazing’s efficacy in restoring ecosystem biodiversity while sequestering carbon in the soil. And then the ecological merits of eating/not eating me…