National Poetry Month in the Garden 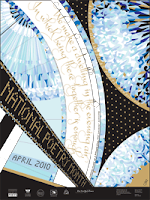 That April is national poetry month seems appropriate, considering that it's a month of new beginnings, a time when not only do poets get all inspired, but gardeners who never wrote a poem wax poetic. To me, making a home garden is much like writing a poem, while making large estate and public gardens seems more like making movies, such large crews of designers and gardeners are involved.
April is a time for fresh starts and new journeys such as the famous pilgrimage to Canterbury in the 14th Century. Here is how Chaucer began the Canterbury Tales:
Whan that Aprille with his shoures sote
When April with his showers sweet
The droghte of marche hath perced to the rote
The drought of March has pierced to the root
And bathed every veyne in swich licour,
And bathed every vein in such liquor
Of which virtu engendered is the flour
From whose virtu is engendered the flower…
(from Vincent F. Hopper's Interlinear Translation)
In Japan, cherries bloom between January and May, depending on species and location, but I like to think that in the 17th century, zen poet Basho wrote this haiku on one of those mysteriously warm April evenings when we linger outside for the first time:
Cloud of cherry-bloom . . .
tolling twilight
bell . . . Temple
Ueno? Asakura?
April also brings memories and mourning. In the 19th century, Walt Whitman wrote the great pastoral elegy for Abraham Lincoln "When Lilacs Last in the Door-yard Bloom'd":
When lilacs last in the door-yard bloomed,
And the great star early droop'd in the western sky in the night,
I mourn'd--and yet shall mourn with ever-returning spring.
O ever-returning spring! trinity sure to me you bring;
Lilac blooming perennial, and drooping star in the west,
And thought of him I love...
T.S. Eliot, an embittered thirty-four year old with a rage for scholarship and allusiveness, played off Chaucer and Whitman in 1922 with his famous opening lines of "The Wasteland":
APRIL is the cruellest month, breeding
Lilacs out of the dead land, mixing
Memory and desire, stirring
Dull roots with spring rain.
Winter kept us warm, covering
Earth in forgetful snow, feeding
a little life with dried tubers.

Somehow, I don't think he was a gardener. Emily Dickinson, who was a gardener, wrote poems that were, as Marianne Moore put it, "imaginary gardens with real toads in them." So many of her poems mention garden life, it's hard to choose just one. Surprisingly, she wrote more poems each about summer, fall and winter than spring, but perhaps that's an indication of the New England climate in the 19th century. Here is one that might be about April:
There are many excellent modern poets who have written about flowers, gardens and spring in its varying moods. A good selection can be found at the American Academy of Poets website, and lots of other good poetry, besides.
poetry seasons

Anonymous said…
Thanks for the poetic reminders..that April is both the harbinger of flowers and a transition time for us to shake off winter and move right into digging followed by porch-sitting.
xoxo
Mom
April 7, 2010 at 1:04 PM

Anonymous said…
Dear Adrian, I have very much enjoyed this interesting and varied selection of poetry which you have selected to mark the arrival of spring.

Benjamin Vogt said…
Eliot, Dickinson, Whitman--I love those folks. There's something clearly American / primal about their poems, something I see so litle today (perhaps we are too comfortable in our poetry pants these days).
April 7, 2010 at 2:36 PM

Edith, yes I do know and like that poem, and thought of including it, but my blogging time was up.

Benjamin,I agree about those "greats." There's a kind of core fearlessness and idiosyncrasy in those three and certain others that gets lost in much poetry that is "nice to read."
April 7, 2010 at 5:53 PM