Posted by Adrian Ayres Fisher on April 14, 2010
To burn or or not to burn is the question many native plant gardeners ask themselves in spring, at least in my prairie/savanna region. I'm not sure about other, non-prairie parts of the country, but here our natives' adaptive evolution has included adaptation to fire. For that reason some prairie grasses and forbs have roots that go down twenty or thirty or even forty feet. It's amazing to me to imagine roots growing down as far as my two story house is tall, searching out nutrients and bringing them to the surface, helping the plant survive frosty winters, droughty summers--and fire. In savannas, Bur oaks have thick, corky bark that helps them survive. Fallen oak leaves form a carpet that burns well without flaring up as some other leaves do. After a fire, especially in spring, it is amazing how fast the area greens up. Fire revitalizes the landscape.

Prairie fires are the stuff of legend. Lightning strikes cause some, Native Americans historically set others. When a big one got going it was a fearsome thing to animals and humans alike. In the 19th century the Prince of Wales once visited Illinois for the shooting, and hoped he might view a prairie fire, which he did. Illinois forest preserve districts now use fire much as 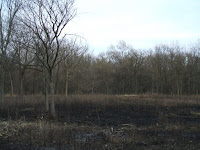 the Native Americans did to reinvigorate natural areas, and to help keep invasive species at bay. According to the April 2010 Habitat Herald, last fall crews in six Chicago-area forest preserve districts burned almost 4,000 acres of natural landscape. This spring the controlled burns continue, and one can sometimes see plumes of smoke when driving local expressways. Last spring was too rainy, but this spring, fine and dry as it's been, has been ideal for burning. Dave from Osage + Orange took this picture of a prairie remnant our restoration group is managing, shortly after a recent controlled burn.

I've never burned my natives--confined space, mixed with non-natives--but know people who do, even areas as small as ten feet square. If you've left the dry grasses and forbs standing, they burn quickly, so the whole process might take ten minutes, quick enough that the neighbors might not even realize you've done it. What I do is leave everything native standing all winter and then chop it down in spring. Some of what's chopped gets scattered around the plants to the delight of local birds who view the area as a sort of building supply store. The rest goes into the compost pile, by this time unfrozen and starting to function again.

get a little closer to burning, though. The other week I went to Trailside Nature Museum in River Forest, where Irene Flebbe and an assistant were burning the small native gardens that front the building and make the entry patio a pleasant place in summer. Irene, who's certified to burn by the Forest Preserve District of Cook County, was attired in a bright yellow burn suit, which looks and feels like cotton, but retards fire. She and her assistant had equipment that included a garden dragon (a small, specially curved propane torch), a hose, a pusher that looked like a thick heavy rake, and a flapper (used to beat out stray sparks or small blazes).

Irene mentioned that the weather was perfect for burning: warm, sunny, and most important, fairly still. As she worked, she explained her method to me and a group of fascinated children. First she thoroughly doused the perimeter of each area with water from the hose. Then she used the garden dragon to set fire across the garden so it would burn traveling into the wind (called a back fire). The fire traveled quickly along the ground, as the oak leaves burned steadily and the stalks flared up briefly. Each area took about five or ten minutes. Only a strip along a path required the assistant to use the pusher to bunch the oak leaves so the fire wouldn't travel further than necessary, and the heavy rubber flapper wasn't needed at all. What was left was a thin layer of ash that will add nutrients to the soil. By now, the gardens are already greening up, and the casual visitor would never know there has been a tiny conflagration.
forest preserves native plants restoration seasons Thatcher woods

Diana Studer said…
Hmm. Where does this fit into global warming, greenhouse effect? A few weeks ago we drove into Swellendam in a 'summer' thunderstorm. The next day as we drove home, there were many fires in the mountains, started by lightning (we have Mediterranean fynbos adapted to fire). Even in our own mountains. And the farmers are busily burning the wheat stubble. Soot and ash everywhere. I dunno.
April 14, 2010 at 3:42 PM

Good question. I've wondered that myself.

Perhaps prairie (and fynbos) fires are acceptable because they're within the realm of natural processes and necessary for eco-system health. Atmospheric CO2 overload via burning of fossil fuels isn't, and makes its impact on a much larger scale.

On the other hand, some of our farmers burn corn stubble, and natural wild fires in California rage out of control due, in part, to global warming, so, well, it gets complicated.
April 14, 2010 at 5:32 PM

Anonymous said…
Adrian, This is such an interesting issue. It has been traditional in Maine to burn the blueberry barrens in fall after the harvest. A few years ago, Acadia National Park did a test burn in an area that hadn't been burned before. (Since more than half the park suffered from a huge fire in the 1940s, people are a bit touchy about fire.) They found that the blueberry crop the following year was much greater in the area that had been burned. -Jean
April 14, 2010 at 9:15 PM

Adrian Ayres Fisher said…
Lisa and Robb, I'm told you can order them online. They're also good for spot weeding on sidewalks.

Jean, I didn't know blueberries would need burning. It makes since though. They also grow in the dunes landscape at the south end of Lake Michigan.
April 15, 2010 at 10:41 AM