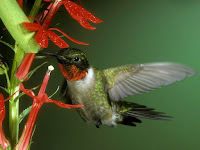 About Ruby-throated Hummingbirds
Anyone who has ever seen one of these cute 3-inch birds hover nearby has probably not forgotten the experience. The ruby-throated hummingbird is native to this part of the Midwest. They winter in Central America, Mexico and the Caribbean and fly north in the spring, passing through our area in late April to early May. Males sometimes start back south as soon as July; females follow somewhat later and the juveniles later still, up to the first frost. Hummers tend to return to the same places to feed during their long migrations. They find suitable places to linger by sight, which is why bright red flowers as well as feeders help attract them. (Photograph by Robert Lubeck/Animals Animals—Earth Scenes)

How The Project Began
We, Muriel and Adrian, have been gardening as neighbors for over twenty years and had never seen hummingbirds in our back yards. In 2008 Muriel decided to see if she could attract them. She put out two feeders, and amazingly, a pair showed up during the fall migration period, staying around for several weeks before continuing south. We decided it was in part the feeders, but also because we have many hummingbird attracting flowers in our yards and don’t use insecticides.
In 2009 we started this project and several neighbors joined, also putting up feeders and planting appropriate flowers. The hummers returned that fall. In 2010 we enlisted even more neighbors and to help make our block a real haven for these beautiful birds. Who knows how many hummingbirds might decide to stop by on their way north or south, or even stick around to build nests and raise young? 2015 update: we've been seeing hummers since early spring and all summer long.

How to Attract Hummingbirds:

For More Information
The National Geographic site is informative, as is the Cornell University All About Birds site. To learn more about attracting hummers, go to www.hummingbirds.net  or the kid-friendly www.rubythroat.org. Track hummingbird migration at Hummingbird Journey North. The Hilton Pond Nature Center in the Piedmont region sponsors Operation Rubythroat. A fascinating PBS documentary, Hummingbirds: Magic in the Air, can be seen at PBS: Nature